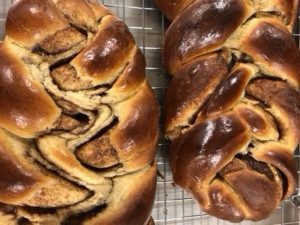 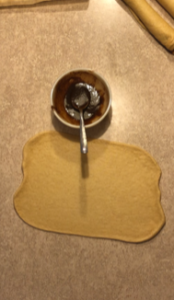 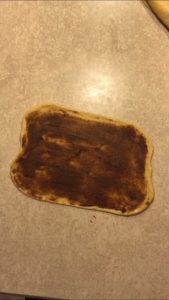 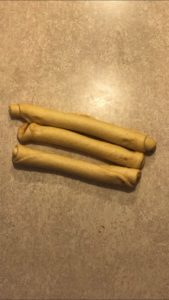 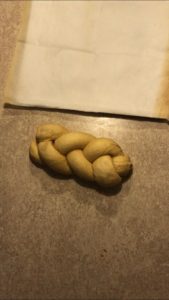 Swirl mixture and dough- before spreading and after

After being coated with swirl mixture, the dough is rolled and braided 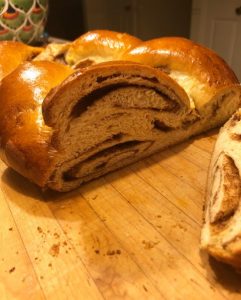 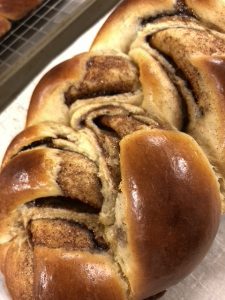 Ingredients (for one large loaf):

Add yeast to 3 tablespoons of warm (not hot) water in a glass or plastic bowl and stir until yeast dissolves. Add a squeeze of honey and let stand at room temperature for about 10 minutes until foamy and risen.

In a separate bowl, beat 2 eggs with a fork. Add oil, salt, and 1/3 sugar and beat until pale yellow and slightly thickened. Beat in ¼ cup warm water. Add ½ teaspoon cinnamon and a generous squeeze of honey.

Add enough flour ½ cup at a time to form smooth dough, beating well after each addition. Continue mixing and adding flour until dough forms a ball and is no longer sticky. Turn dough out onto a floured surface and knead for 4-5 minutes until stretchy and smooth (test by gently pushing a finger onto the surface of the dough- if it springs back, it’s ready to move on).

Lightly oil a large bowl. Add dough, turning to coat with oil. Run a clean kitchen towel under hot water and wring out until no longer drippy, then cover dough and bowl with damp towel. Leave in a warm area for 1-1.5 hours until doubled in size.

When the dough has doubled from its original size, gently turn it out of the bowl and punch it down. Cut into 3 equal pieces, setting 2 aside. Roll the first piece into a 12×8 inch rectangle (or until ¼ inch thick). Spread a generous amount of swirl mixture evenly onto the dough and roll up, starting from the short side. Pinch edges shut and set aside. Repeat process with other 2 balls of dough. Braid by bringing the right strand to the center, followed by the left, tucking both ends underneath themselves at the end.

Place the braided challah on a baking sheet lined with parchment paper. Let rise in a warm area until doubled again, about 45-60 minutes (cinnamon swirls might open slightly, that is perfectly fine!)

Preheat oven to 375°F. Prepare egg wash by mixing 1 egg and 1 tablespoon of water. Once challah has risen, generously brush all surfaces with egg wash. Bake uncovered for about 10 minutes, covering with foil once challah starts to turn golden brown. Bake for another 10-15 minutes until swirls on top are no longer raw and challah sounds hollow when tapped. Transfer loaves to cooling rack or enjoy when warm!