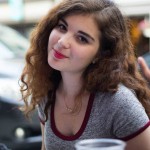 My first international flight, in a way, brought me home.

We landed around five in the afternoon, Tel Aviv hinting toward sunset as we shook out our shoulders from the eleven hour trip. Spilling into the airport, we all tried to message our parents: “I’ve made it.”

We’d made it to Israel.

Night fell heavy by the time we exited Ben Gurion Airport, loaded our luggage and ourselves onto the bus that would truly become our most permanent home across the ten ensuing days.

Driving through Haifa at night, traveling up to Nes Ammim, it was too dark to see the countryside. We had to sleep and wait until morning to see what the land could show us, to get a clearer picture of just what Israel looked like.

From the top of Mt. Meron the next morning, we could see it all.

Israeli landscape changes in seconds, and the plush green of the north was the first spread of international earth I really came to know. Pausing to take a breath, pausing to take pictures, we could see the boundaries of other countries from the peak.

Israel is a relatively small country; it compares in size to New Jersey. Tiny. Its size is why its geographic variation astounds me. From the bus window, sand dunes could melt to sparse shrubbery and then greenery in only an hour’s drive.

That’s to say nothing of the cities.

It’s easy to forget, in the United States, how incredibly old human history is. The Old City of Jerusalem brought ancient history to a sort of reality I’d never previously confronted. The stone structures—Jerusalem stone—carry so much more weight than I can explain. As we skirted through the stone structures, it was incredible to confront age, to realize that my Jewish identity hails back so much further than any other time stamp I’ve ever known or seen in my little New York town. Physical proof stood before me; proof that Hebrew School stories were based on real places, that my history went back further than I could imagine.

Tel Aviv was a younger city. It was there that we toured graffiti to find artwork on Florentine’s walls (think Greenwich Village, but with palm trees). It was there that I, 20 years old, had my first legal drink (although they did card me at the club, which was a little funny considering the drinking age is 18). From Shuk Ha’Carmel, where I bought necklaces and ate burgers with friends, to our time spent in Independence Hall learning about Israel’s history, the city was rich with young life.

And between the cities were Masada, the Dead Sea, Chan HaShayarot, even Sderot. Sderot, a town that persevered even as Qassams fell, the citizens converting a bomb shelter into a music studio. The Dead Sea, where my friends and I spread mud on ourselves and floated on our backs—it’s amazing, to float without trying. Until you do it, you can’t believe it can happen. In Chan HaShayarot, we slept in a Bedouin tent weaved from goat hair and walked the desert at night, rode camels in a line during the day (their legs are really odd). The next day, we hiked Masada, saw the ancient ruins, peered from above at the Dead Sea and took the winding Snake Path down, our legs shaking on the rocks.

And we did it all with our Israelis. When we heard the “soldiers” were joining us, it made them sound like an “other,” but once we boarded the bus, that was clearly not the case. Our soldiers, our Israelis, were our age. Initial awkwardness from a perceived language or cultural barrier fell away as we realized not only that there wasn’t a language barrier, but that these Israelis were our age, were us, were no different except in where they were born. Their input, especially as they viewed Israel from our tourist perspective, was invaluable in helping us understand the sense of unity throughout the country and even the more nuanced aspects of how their culture is shaped and what their lives are like in comparison to ours.

Standing on Har Herzel with them, as they shared stories of friends lost in combat, war became far more real and poignant. Talking with them on the bus, learning songs, and eating food during a beautiful sunset Shabbat on the beach in Ashkelon were all beautiful and integral moments. I’ll never forget the first time my toes went in the Mediterranean or the rocks I slipped into my pocket.

I was worried, as a writer, that I wouldn’t find words to write during the trip. But in Sderot, I started writing poems and didn’t stop. On Har Herzel, I stood at Hannah Senesh’s grave and felt an inexplicable connection.

After I got back to Penn State, I determined the focus of my M.A. poetry thesis: my identity as a 20-year-old Jewish woman in the 21st century. Before Israel, I never would have brought my Judaism to this project. Before Israel, I had been planning to write short stories for my thesis, not poetry. But here I am, two months later, translating a play about Hannah Senesh from the Hebrew three pages a week with a professor, reading contemporary Jewish poets, teaching myself the history of my people.

Traveling to Israel altered me: not in the cliche sense, but in a real, meaningful sense. I’m not a different person, but I’m a deeper one. I came back with far more about myself to explore.